If you’re a woman reading this article, chances are you don’t play golf. The PGA would like to change that.
The Professional Golfers’ Association (PGA) of America has launched an industry-wide initiative to bring more women into the game, and has appointed an executive to help make it happen. Her name is Sandy Cross, and she is a woman on a mission.
Participation in golf is flat or declining across theUnited States, and like many industries, it’s looking to the female population for growth. Only 19% of all golfers are women, according to the National Golf Foundation. The number of women who are actively engaged in the sport is even less. So how easy will it be to recruit women to play? I had to find out.
I could be considered an “Exhibit A” of the golf industry’s target audience. When Ms. Cross contacted me to speak at the recent PGA Merchandise Show, I had to admit that despite the fact that I spent the better part of my childhood living near a golf course (on military bases) or literally on a golf course (we lived on the fourth hole of aTexas course when I was in high school), I had never played the game. I even drove the beer cart at our local golf course for a summer in college, and hadn’t touched a club. I never even thought about it. I considered golf to be a game for my dad and his friends. I was too busy being a teenager.
Read More on Forbes. 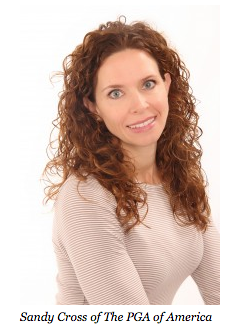